ANAHEIM, Calif.—Anyone who’s ever tried to take their favorite guitar onto an airplane knows what a hassle that can be. Will it fit in the overhead compartment? Do we trust airline personal to get our favorite instrument from point A to point B without losing it?

So we loved the idea of the Ascender from Ciari Guitars, a truly portable, foldable guitar, one that bends in half and can fit under the passenger seat. (You will have to retune after bending.)

Jonathan Spangler brought his prototype to NAMM this week, the musical instrument meets technology show that attracts over 100,000 people. It won’t come cheap — the model is $3,000 and will be out later this year. 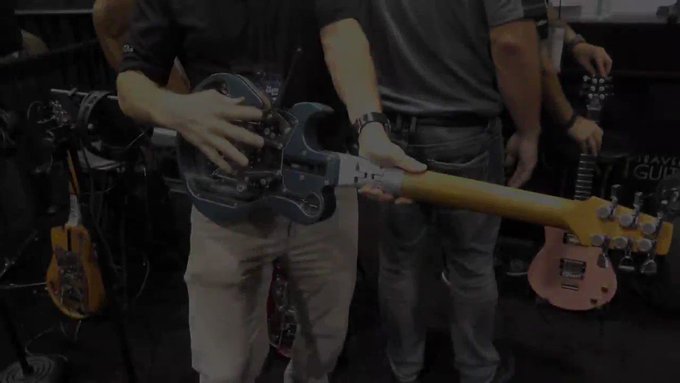 Yes, there have been other travel guitars, smaller body models, “but they look like hatchets, paddles or road sticks,” says Spangler, the CEO of Ciari. “You’ll never lose custody of your guitar again.”

But we can dream.

A foldable travel guitar was introduced at the NAMM music meets technology show. The Ciari Guitars, Inc. Ascender™ Premium Travel Guitar will be out in late 2019, and sell for $3,000 (Photo: Jefferson Graham)

The singer/songwriter PLASMIC demonstrates the Yamaha Sonogenic “Keytar”, a $299 keyboartd for young people who don’t know how to play. Software enables users to play along with songs in key; they can also play normal piano as well. (Photo: Jefferson Graham)

—The Sonogenic Keytar. The Keytar, as Yamaha is calling this new instrument, is a portable electric keyboard that can be worn like a guitar, in true rock star fashion. The tech twist is that Yamaha’s companion Chord Tracker app analyzes your iTunes music library and offers song suggestions for you to play along with. Even if you don’t know how to play the song, every note you end up playing, while in “Jam Mode,” will be in key with the song, no matter if it’s a C, B flat or A sharp. You can also play the piano keyboard the traditional way as well. The $299 keyboard will ship in February. 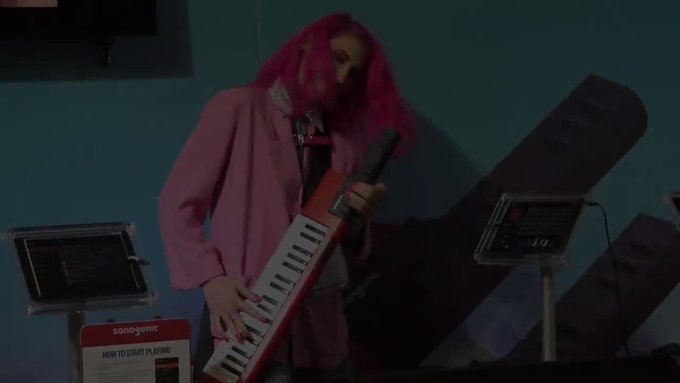 —Kids can jam with imaginary friends on music.ILuv. The augmented reality app, introduced at NAMM, looks to get kids more excited by bringing in cartoon jamming mates. “I wanted to give kids a social environment to collaborate with one another,” says music.ILuv founder Melody Khair. The app is free, but there are in-app purchases to buy songs and animated characters.

Musician Eric Parker plays beats on this $299 KAIKU glove, which connects to bluetooth and a smartphone or tablet. (Photo: Jefferson Graham)

A Musical glove and ring drums

The Kaiku glove connects to a smartphone or tablet via Bluetooth and can be used to make drumming sounds. A drummer could even ditch the set and just connect it to an amp. Inventor Kalevi Louhivuori says he set to make “the world’s easiest instrument. Anyone can learn to play their own hand.” It will be out in late 2019, at $299 for an adult glove, or $249 for a kids version.

Meanwhile, another company showed off something similar — $64.99 rings that also connect to mobile devices and an app to make beats. SpecDrums, from education company Sphero, are “the most portable way to bring out the music in you,” says the company’s Zane Taylor.  The ring comes with a pad to drum on. Two rings (for both hands) can be had for $99.99.

An exhibit for Fender’s new American Acoustasonic Telecaster, a combo acoustic guitar that can also be played as a rocking Telecaster guitar. (Photo: Jefferson Graham)

—The acoustic/electric guitar. Guitar maker legend Fender introduced the American Acoustasonic Series Telecaster, a hybrid guitar that can be played without amplification as a traditional acoustic guitar or plugged into an amp for the natural, folk and country sound that comes with acoustic guitars. While plugged in, flick the switch on the side of the guitar, and now you’re rocking out, electric style, on a Telecaster, a guitar made famous by rock legends like Bruce Springsteen (who posed with one on the cover of “Born to Run,”) and Keith Richards of the Rolling Stones. The guitar, on sale now, doesn’t come cheap. It sells for $1,999.

Closeup of the jewels and gold in the $1.2 million guitar strap from The Guitar Strap Co. of Australia (Photo: Jefferson Graham)

The world’s most expensive guitar strap

—And finally, if the thought of dropping $2,000 for a new guitar doesn’t phase you, how would you feel about $1.2 million for the world’s most expensive guitar strap? The bejeweled wonder touts 40 carats of diamonds, sapphires, rubies and emeralds set into 1kg of 18K gold. It was created by artist Colin Burn of Morley, Australia who set out to make “the world’s most beautiful guitar strap.” His hope is that he sells it to an “art collector or someone who loves rock and roll.”