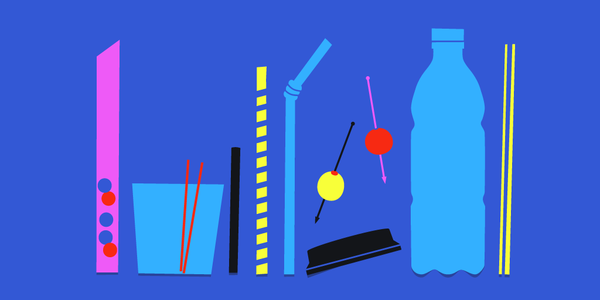 Niagara Falls and its surrounding parks see millions of visitors a year, and all that foot traffic results in a lot of trash — 832 metric tons each year from the Canadian areas alone. Still, park sanitation workers were surprised to find a piano, broken into pieces, among the items left in the garbage one day.

“People dispose of all kinds of things,” said Steve Barnhart, the senior director for parks, environment, and culture at the Niagara Falls Parks Commission in Ontario. “But that was really unusual.”

Although odd things occasionally surface at tourist hot spots, the bulk of the waste in the garbage cans comes from much more common, repeat offenders. Here, in time for Earth Day, are some items that major tourist destinations often find tossed out by travelers — and some ways that you can avoid adding to all that rubbish along your own journey.

Travelers often use disposable items as conveniences that they can simply toss afterward. But when a site hosts millions of visitors and hauls out hundreds of tons of trash a year, as many popular tourist destinations do, all those disposable items add up fast in ways that are quickly apparent on the ground.

Although that smashed piano caught Mr. Barnhart’s attention, he cited disposable plastic items — such as the brightly colored ponchos that visitors wear near the falls (which the park workers collect after the tours and bale together to recycle) and single-use drink bottles — as the kinds of items he and his fellow park workers see much more often among the waste removed from the parks surrounding Niagara Falls.

Angie Renner, the environmental integration director for Disney Parks, also pointed to plastic bags, cups, bottles and straws as some of the more common items that end up in the receptacles at Walt Disney World and the company’s other theme parks. And Jamie Richards, a park ranger and spokeswoman for Yosemite National Park, noted that plastic water bottles and cardboard coffee cups (including their plastic lids) frequently show up in the trash.

You have 3 free articles remaining.

The most effective way to reduce the number of disposable items in the trash is often to just stop purchasing so many of them in the first place.

“Something that certainly helps us out is trying to reduce your single-use plastic water bottles,” Ms. Richards said. “We have plenty of filling stations throughout Yosemite National Park and that just really helps reduce a lot of the waste that’s generated in the park.”

Mr. Barnhart also cited the installation of water-filling stations for reusable water bottles in Niagara Falls’s parks as a way they have encouraged the reduction of trash.

Different drinkware options can replace other paper and plastic disposables. If you’re going to drink hot coffee or tea, carry a travel mug. If you like having a straw, bring your own reusable one. If you prefer to keep your drinks ice-cold, bring an insulated water bottle so that you’re not tempted to buy chilled bottles on site. Or if you want to carry the smallest pack possible, go with a collapsible bottle. (Wirecutter has recommendations for these in guides to the best water bottle and the best travel mug.)

Sophie Grange, a spokeswoman for the Louvre, listed maps and entrance tickets as some of the most common items the museum sees in the 1,200 tons of waste it carts out a year. The museum does recycle paper, but for visitors who are carrying a smartphone, paperless alternatives can be an even better option.

“The best way to reduce waste is to not produce any,” Ms. Grange said in an email. Instead she suggests that visitors who want to reduce their trash footprint download e-tickets and use the museum’s app or refer to posted signs for guidance on directions.

In addition to providing options for visitors to skip the printouts, she said the museum also tries to find ways to keep its own printed materials out of the landfill too. For instance, it sends promotional banners for temporary exhibits to a company that turns them into bags; the banners even go to archaeological schools for use as coverings to protect dig sites.

Although tickets and maps for many tourist destinations are offered electronically, some travelers prefer to keep their tech to a minimum or may be traveling in areas where dicey connections and power failures are common. If paperless travel isn’t practical for you, the best thing to do is to have a place ready to hold your papers so that you’re not leaving a trail of them behind as you move. You can use a travel journal or notebook (Wirecutter recommends the Traveler’s Notebook), customized with an inset folder, to keep loose papers together until you can sort through them at home.

Disposable cups, bags, and utensils may be the first kinds of items that spring to mind when you’re thinking about how to reduce waste. But the packaging your gear and supplies come in can also be just as big of a problem. And when you’re on the road, you may find that places to dispose of that packaging are much more limited than they are at home.

In Yosemite National Park, Ms. Richards often sees this problem in action, especially when campers bring new gear directly from the store into the park without unpacking it.

“A lot of visitors don’t think about the amount of packaging material that comes if you buy a new sleeping bag, or a new tent,” she said. Before leaving home, “if you have the chance to pack down and condense, you can reduce the cardboard and plastics that you bring into the park.”

You can also cut down on the amount of packaging you’re carrying by planning ahead and bringing a reusable packable bag to carry groceries or other supplies instead of picking up a disposable plastic or paper sack when you do your shopping. In fact, according to the United Nations Environment Programme, more than 60 countrieshave already put restrictions on single-use plastic bags, so carrying your own not only reduces your trash footprint but also means you’ll be better prepared in locations where bags aren’t available.